A 4-day multi-sport event for the UK’s elite young athletes of school age, the 2016 UK School Games was held at Loughborough University. The event seeks to create an inspirational and motivational setting that not only provides elite young athletes with the opportunity to thrive and perform at the highest levels, but encourages more young people to take part and succeed in sport.

I was honoured to represent my region, East Midlands, as a cyclist, in the 2016 UK School Games. I was chosen to be a part of the 4-man team by my finishing position in a few key selection races, a couple of months before the Games: A criterium/circuit race around the grounds of Loughborough University, the 2016 East Midlands Circuit Championships, the Castle Criteriums (Lincoln), and a couple of races at Darley Moor Motor Racing circuit.

Our best 3 results were taken, along with our cycling palmarès – Basically a cycling CV, listing our historical results.

A couple of months later, it was time to pack my kit and bike, ready for 4 days of intense, challenging, and fun, racing.

Meeting up with my fellow teammates and coaches at Trowell services off the M1, we packed our luggage into a coach, and headed off towards Loughborough University. An hour or so later, we arrived at the Campus – A very big Campus! I must have walked for close to a mile with two massive rucksacks, which I thought should have been a sport in it’s own right.

Unpacking our massive loads, we took a quick tour of the campus, before getting an early night’s sleep for our first race – The Team Time Trial (TTT).

The TTT would take place at a disused airfield, on the outskirts of Prestwold. Arriving with a safe amount of time to spare, I recced the course with my teammates, checking out the road surface, wind direction and for any hazards.

Raindrops and gusts of wind marked the beginning of a dull day, weatherwise at least. Warning up on wet rollers, we cautiously watched and cheered on the East Mid girls as they stormed around the course to claim 1st, pipping 2nd place by a tenth of a second!

The officials called us to the pits, ready to begin. Lining up against the barrier, the countdown began.

Settling down into a good rhythm, we took turns of sensible length, as we battled against headwind and sidewind for the majority of the course. With 1 lap down and just 1 lap to go, we began to increase the pace. Having lost a man (now down to 3 riders), we had lost a significant amount of firepower and shelter. Riding quickly as a trio, we took it cautiously around the bends, following a couple of incidents involving other riders prior to our ride. Sprinting for the line, we placed 8th out of 13 – Not too bad, considering we had lost a man with half of the race to go.

I was getting used to this waking-up-early business. After downing some orange juice and some toast, I headed back to our base to prepare for the Street Sprints, that would conveniently take place within the Campus grounds itself.

The dark clouds threatened the dry race course and soon enough, raindrops began to fall. The course was short and twisty – Here’s a quick run through the course, from start to finish:

With the start times for qualifying printed and noted, we were given some time to ride the racecourse, taking onboard course hazards and estimating what speed should be needed to get around each corner; we practiced our starts with the help of our coach. TV cameras were located at various points around the course, ready to record our efforts. Here’s a pic of me practicing the second 90° turn, prior to qualifying: 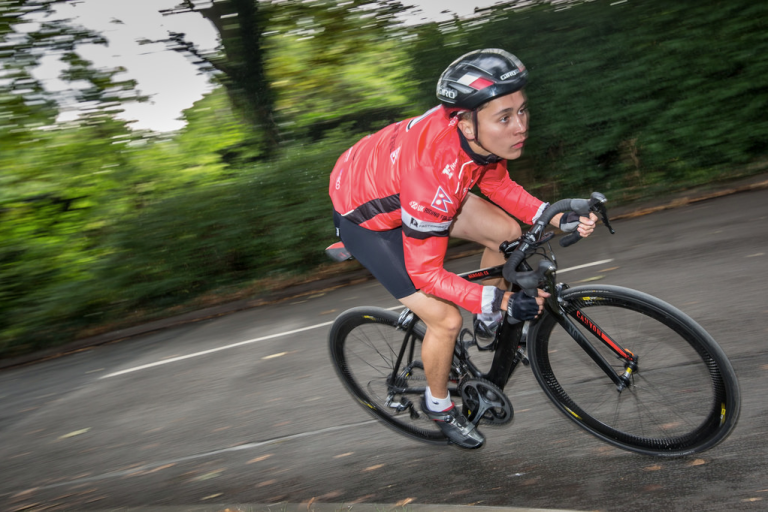 Qualifying result: 9th. I was surprised by this, in all honesty – I had taken it cautiously around both 90° turns.

Below are the results from qualifying: 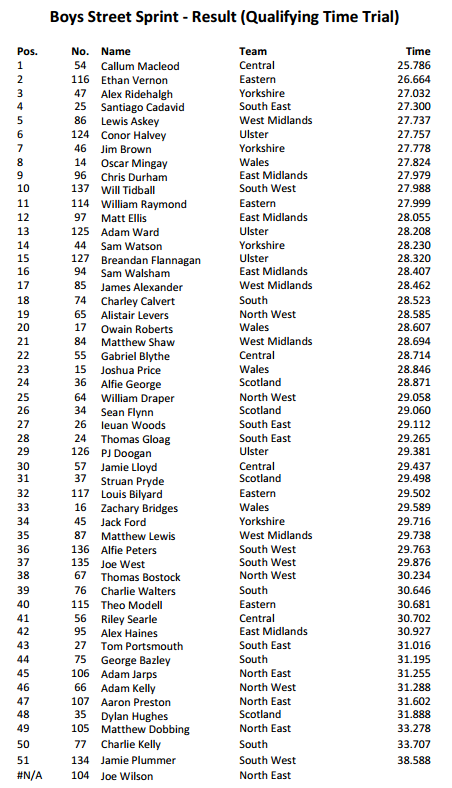 The field was divided into roughly 13 categories, each based on their qualifying time. Each category would see 4 riders contest for 1st and 2nd in their category, which would result in a promotion to a more selective category. Those who finished 3rd or 4th, would contest for minor places respectively.

Starting in category 3 (having qualified 9th), I was unfortunately up against my teammate. The other two riders were notably strong.

The countdown began – Lined side-by-side, there would be a mad sprint down to the first corner.

Laying down as much power as I could, I claimed second spot as we turned left, ahead of Mingay and my teammate. My rear wheel slipped a little whilst cornering, adding to the high levels of adrenaline and excitement.

A few more pedalstrokes and I was now at the second corner, on the wheel of first. I applied my power a little too soon, and unfortunately crashed, bringing down the two riders behind me. As soon as I crashed, I picked up my bike and desperately tried to cross the line for 2nd, however I was beaten to it by Mingay.

Taking it purposely steady in my minor final, I wanted to avoid further injuries and mechanicals from crashes, with one event still yet to come; the road race. Overall, I finished 15th.

You can view the Street Sprint action on Youtube, via the link below: My first heat (the one where I crashed) can be seen from 5:13:50.

The final day of the 2016 UK School Games, I was more determined than ever to showcase my strength and power. The pain began as soon as I woke up, as I carefully pulled the duvet off from my sticky road-rash wounds.

Arriving an hour or so at Mallory Park, after breakfast, we set up base and discussed tactics. I fortunately covered my wounds with dressing, thanks to the paramedics on-site. The wind was notable, and would play a part in the race. As a tactic, I decided that I would use as little energy as possible, and wait for the likely bunch sprint.

Although Mallory Park is a racing circuit, it does feature a small hill. Not taxing after 1 or 2 laps, but after 30 ascents, you do start to wish it wasn’t a part of the course.

The girls raced whilst we warmed up – Some noticeable breaks in the peloton led to the formation of several groups, spread across half a lap. A notably solid ride by Poppy Wildman of East Midlands resulted in 3rd place.

Now our turn to put in strong performances, the boys lined up on the start line. We would complete 30 laps of the circuit, totalling 66km.

Setting off hard and fast, the pace would not subside. My heart-rate spiked to maximum of 209bpm on the third lap, indicative of the effort being put out. A couple of riders were already being ‘shelled’ out of the back, as we averaged close to 26mph for the first 10 miles.

Below: I am 6th or so, in centre of image (white jersey and black helmet).

Below: Looking at my wattage as I begin the small ascent.

Following my tactic, I made good use of available draft, and spent 21.8% of my race freewheeling (no pedalling). On the short descent, I positioned myself into ‘the aero tuck’ position, to minimise my frontal area and maximise my speed. I would make up 5 – 10 places on the descent alone.

Below: I am 6th or so, in this aero tuck position (white jersey with black helmet).

Below: I am 2nd in the main peloton (white jersey, far right).

Below: Utilising the draft of riders as the wind continued to blow down the back-straight. I am 8th, in the white jersey at the top of the image.

With around 15 laps to go, 3 riders broke away. A strong trio, they successfully stayed away from the peloton until the finish line. As the number of laps dwindled, so did the number of riders in the peloton, albeit a small amount. The fast pace was beginning to take affect on all riders. As we neared the final few laps of the race, the pace picked up once more. Riders began to surge towards the front of the peloton. 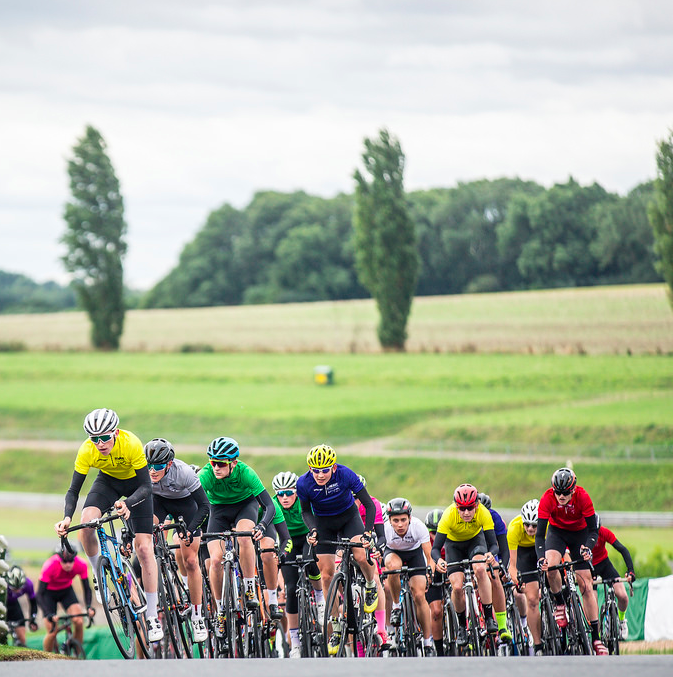 Caught a little off guard by this, I slipped down the bunch, and lost out on a few places. With 1 lap to go, the pace ramped up as we climbed (the hill) for the final time. I made 4 – 5 places on the descent, but was still a good 10 – 15 places back where I wanted to be.

With 600m to go, the pace momentarily dropped as riders waited for someone to lead out the sprint, into a headwind. With around 400m to go, the sprint began – If you could call it a sprint. Everyone was wrecked, and could hardly get out of the saddle.

Although I was tired, I was still able to put in a comparatively better sprint than most, passing numerous riders all the way to the line. Squeezing through gaps, I was making significant progress on those at the front of the bunch, and had passed 12 riders to finish 13th – If the finish line had been 150m further, I reckon I would have contested for Top 5.

All in all, I was very happy with the way I rode. I spent most of my time in the Top 10 of the peloton, and rode well tactically and physically. 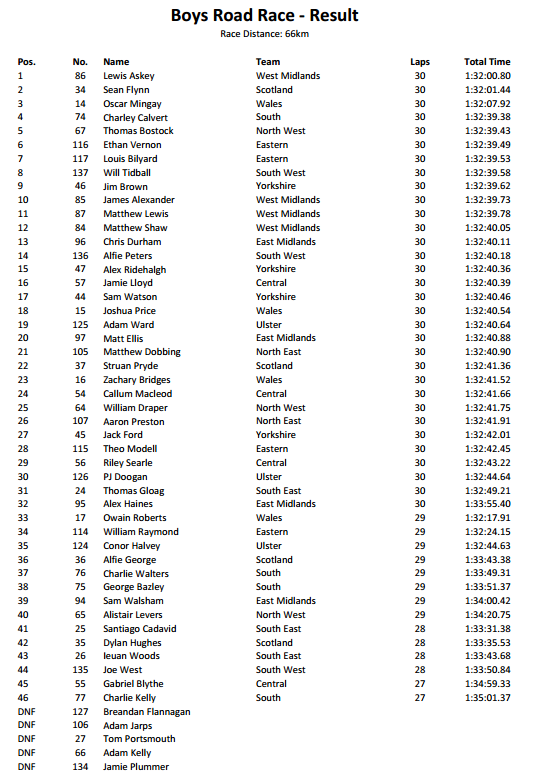 The 2016 UK School Games was fantastic – Definitely up there with some of my best cycling experiences. Thank you to my coaches (Tracey and Mark), my teammates, members of staff and the organisers, for such a wonderful event.