The 2018 HSBC UK | Men’s National Circuit Championships was like nothing I’ve previously experienced!

Olympic gold medallists, national champions, leaders in the HSBC UK | National Circuit and HSBC UK | Grand Prix Series, along with all the major UK professional teams were present, ready to fight for the title.

To put things into perspective, I have listed the representation of some of the teams racing:

It would be a bit like going into this year’s Football World Cup with a 5-man team, vs. an 11-man squad… I would give it my best shot nonetheless!

Described as a technical circuit, the description was accurate.

Starting on Stockton High Street, we would head north before turning right, and then right on to Church Street and another right-hander to head south past Stockton Parish Church.

Heading back towards the high street, the circuit takes another two right turns before a narrow, cobbled chicane that feeds into a left-hand hairpin on to a long straight. Bound to string out the peloton, riders would be fighting for position into here.

After heading south, we would tackle a second hairpin as we take the right-turn back north along High Street for a fast sprint to the finish line. The 180-degree hairpin-turns along with the cobbled chicane would make for thrilling and decisive racing.

After watching some of the women’s race, which was brilliantly won by Anna Henderson (Cycle Team OnForm), I did a quick reconnaissance of the circuit by-foot, to see what kind of speed I could carry into the corners and where any potholes/drain-covers were.

I soon headed back to HQ to get my bike gear-checked.

Being one of only two juniors competing in the event, it was compulsory for my bike to be gear-checked (checked by a commissaire/official to verify I will be racing on restricted gearing). Gear restrictions only applied to juniors in this race, and would prove to be a handicap in the race itself.

Following gear-check, I got into my skinsuit and began my 20 minute warm-up on the rollers:

Racers would be able to ride the circuit for around 10 minutes before the race, to get a feel for the circuit by-bike. Waiting to join the circuit with all the other competitors, it was clear that I still have some growing to do!

Arriving early at the start/finish line, I found myself in a brilliant position. In the second row (the peloton was probably 10 rows deep) and in the centre of the road, I would likely have a clean start and get away safely.

I could not believe how tightly packed we all were at the start line! It was unbelievable. It was like a string of parked bikes against a wall at a cafe stop, except with riders on the saddles. The One Pro Cycling rider in the foreground of these images (centre, white and dark blue jersey) was virtually sat on my brake-hood!

At the start line, we waited for around 10 minutes whilst the photographers snapped some great shots.

I caught up with Liam Davies, a Vitus Pro Cycling rider who I have raced alongside as part of the East Midlands youth team in 2015, on the start-line.

The atmosphere of the race was fantastic: motorbikes with TV crew ready to film the action, live commentary, photographers to capture the action at every corner and spectators eagerly cheering us on.

I took a quick sip from my bottle as we were given a one-minute warning. “Is my bike in the correct gear to set-off in?” and “I’m going to have to set a world record at clipping-in” were the two final thoughts before the racing commenced. The countdown began: 10, 9, 8, 7, 6, 5, 4 and those on the front row set-off early, essentially beginning the race!

The tenacity and speed of the racing was impressive, and relentless – we would hurtle through 90-degree and 180-degree hairpin turns as fast as possible, before launching ourselves out and up to max speed.

Bombing through the corners, I could keep up with the pros. However, gear restrictions hindered my efforts to maintain my position in the strung-out peloton as the speed skyrocketed towards 35mph. I was spinning out on the straights and in fairness, also lacked the power to match the front-guys. 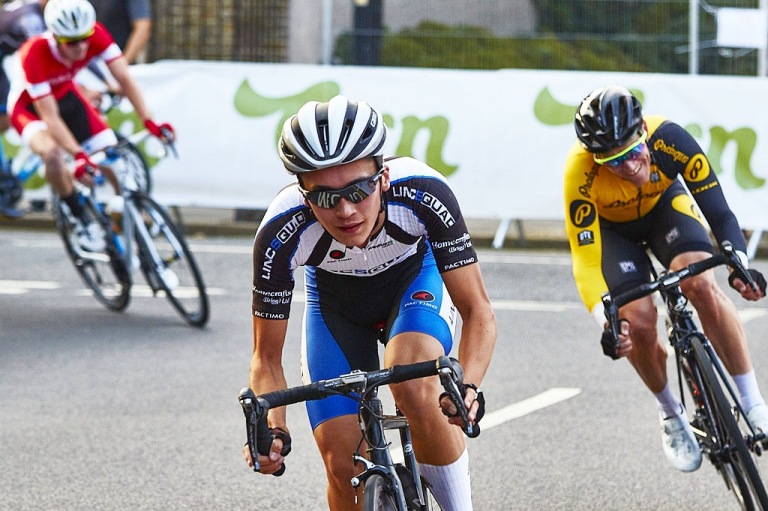 I found myself in a chasing group, that were slowly being reeled in by the leading group. I continued to drive the pace with a couple of other guys, but it was inevitable we would be caught by the leading group at some point. It was a matter of when.

I stayed in for a little over a third of the race, before I was pulled out (lapped by the leading group). I was not at all surprised about being lapped by the best present – I’m young, I have some handicaps and I haven’t done all that much crit racing and training for crits.

All in all, I am pretty pleased with how the 2018 HSBC UK | Men’s National Circuit Championships went.

Getting into the event was, in my opinion, a little win in itself! As a lone rider (not part of a major team) and as a junior, the odds were against me. Nonetheless, the organisers were impressed enough with my historical racing performances to accept me.

I positioned myself well in the first few laps, but just didn’t have the power in the legs to contest for the jersey. Race analysis illustrates that I was lapping around 0.6mph slower than the best riders present. Considering the gear restrictions, the fact that my chasing group was significantly smaller than the leading group and that I’m 18, I think there is plenty of potential.

It was a privilege to be invited to race against the best men in the country. I guess it’s a bit like being invited to the Oscars, but not winning any awards. I thank the race organisers, sponsors, commissaries and spectators for making the event as grand as it was!