‘This is a biography about a man who changed the entire globe for road cycling forever. His name is Lance Armstrong.

As he got older and fitter Lance finally became a world champion in the heart of Oslo when he was only 20! That was in 1991. He was an angry young rider. Lance screamed as he launched his attack and showboated across the finish line. However, in October 1992, Lance had to historize his riding (stop) due to cancer. He was think, weak and sick between chemo treatments,  but delighted to see his friend Eddy Merckx, the great Belgian 5 time world champion of the Le Tour De France. Happily he got excellent treatment and escaped his 50/50 of survival and started training again.

In 1996 he won the Fleche – Wallonne, despite being a much heavier rider. He did adverts for Nike and Nike’s motto is ‘just do it’. Lance Armstrong had a shirt and still does saying ‘Livestrong’, which was in 1996. In the same year he got married to Kik, meanwhile by Lances mother Linda was happy as Lance and Kik went on their honeymoon. He stared into his biggest rival and won a mammoth 7 times in the Le Tour De France from 1997-2006. On some Nike ads they have to test you if you are on drugs. So one of the ads says (Lance is saying most of it):

“Why do they always test me? I’ll tell you what I’ve got. I’m busting my butt 6 hours a day training. What do you want?”

In 2010 that was his last Tour De France. He is a legend. He will be remembered for being the world’s best road cyclist and his achievements. I admire and I am inspired by him. But I will try and beat him!’ 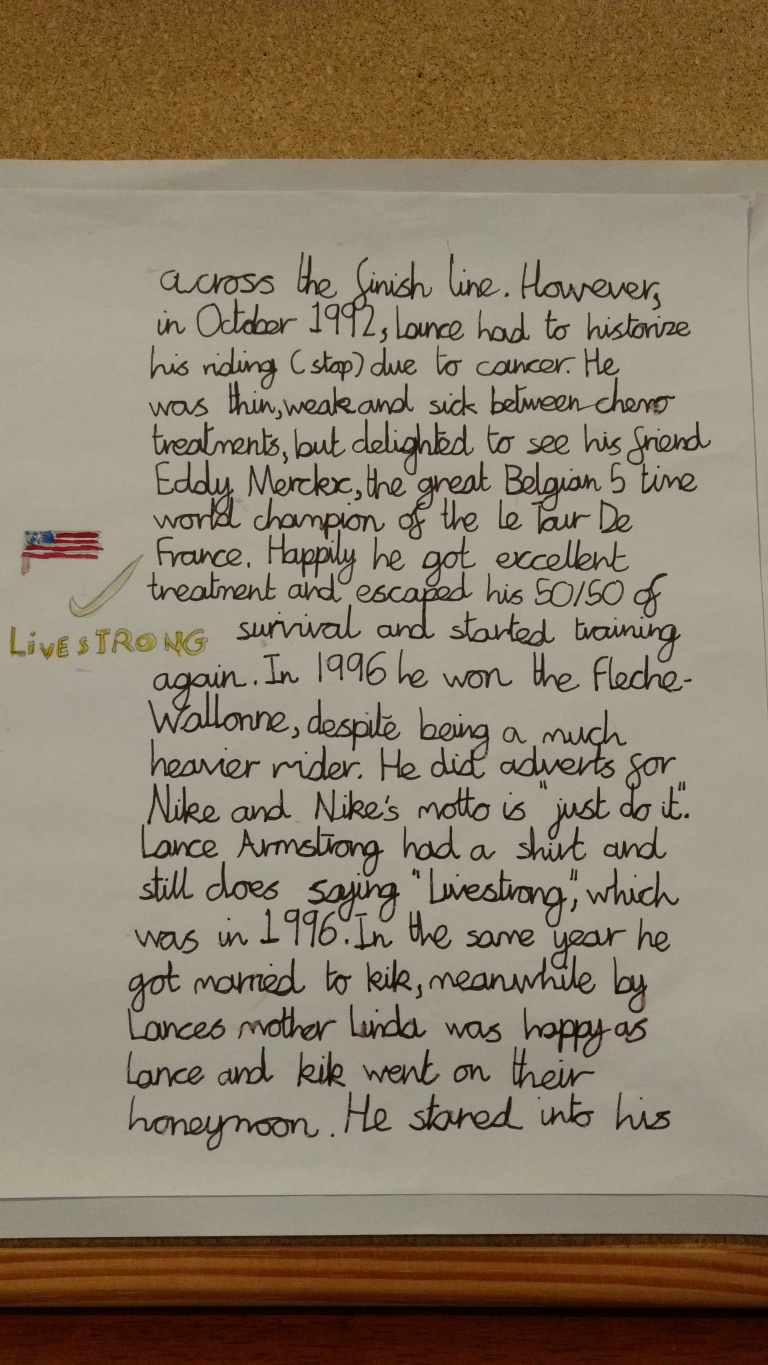 I still have a liking for Lance.

My liking  has fallen a little in the wake of his grand, yet unsurprising doping admission. Nevertheless, I continue my likeness primarily due to his gritty, determined, decisive and partially ruthless character. I would love to have seen Armstrong try to win ‘clean’ (without performance-enhancing drugs), racing against a clean peloton.