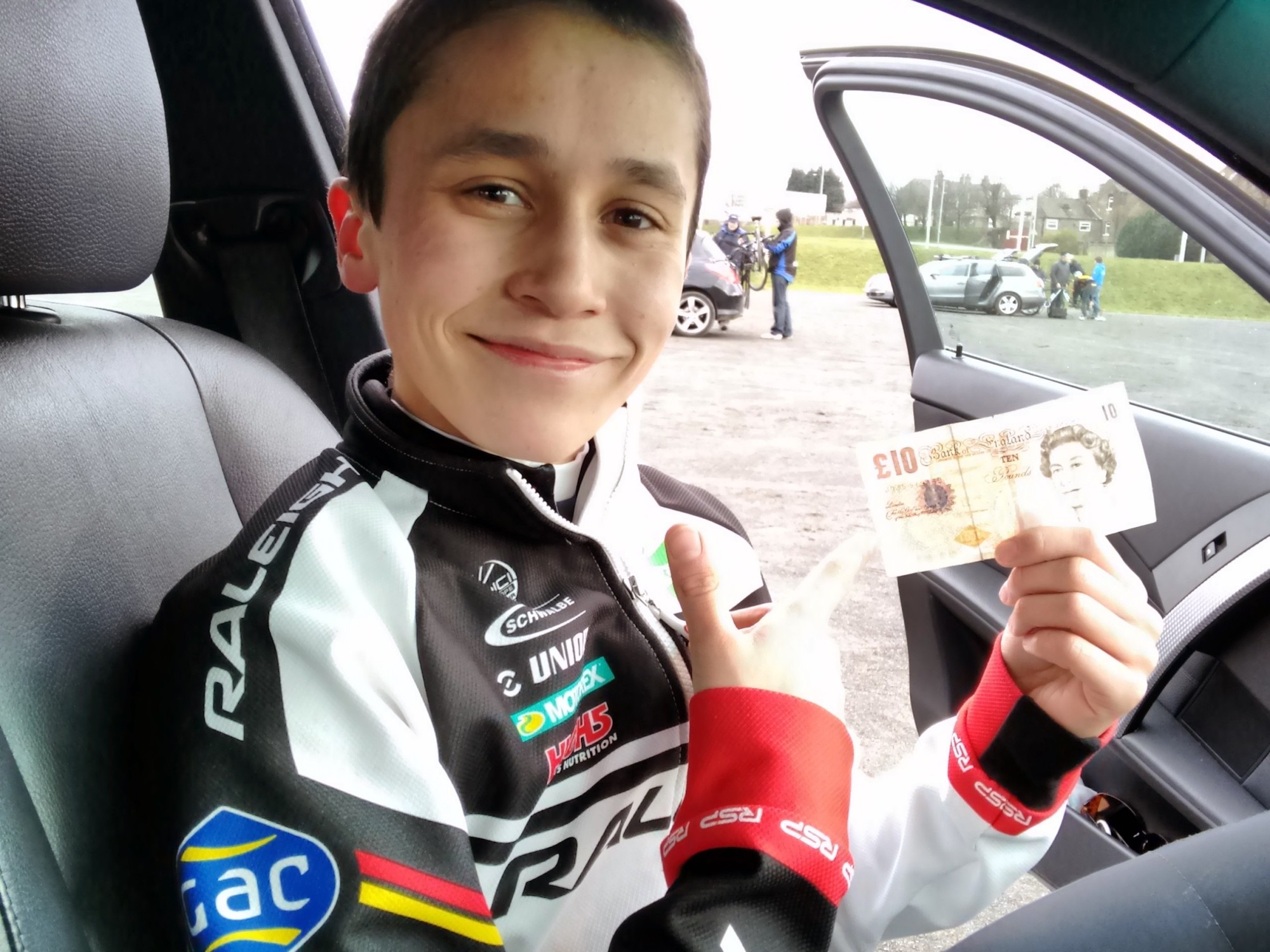 York Sports Day at the Races #1

My aim going into York Sports Day at the Races #1 was to test my fitness as I had not raced since last July. I hoped to stay with the leading group, create a chance for a good finishing position and hopefully give my legs a real burnout by going into the last 200 metres leading the race.

I had forgotten how fast youth races go in the early miles. Almost straight from the gun, the 50 or so riders were averaging 24 mph and we were easily surpassing 30 mph down the back wind straight; a crash at the end of lap 2 reminded me of the dangers of sitting in amongst riders who are struggling with the pace. I kept myself out of danger by patrolling to fringes of the group, moving up and down the field to get some feel for the form of the other riders.

I felt good and as the field broke up I was able to stay at the front of the race. A few riders put in big efforts and broke away, but they were always within sight and their chances of success looked slim. With a lap and a half to go the leading group was down to about a dozen and we’d lapped most of the dropped riders. So although some of the riders around me looked strong and I knew sitting in for the sprint was possibly the better strategy I still continued with my pre-race plan, breaking away and giving my legs a real workout.

One rider got my wheel and I pulled him along for half a lap, gaining around 100 metres on the lead group. I signalled for him to come through and work with me because with less than a mile to go, I could see that a first and second for both us would happen. But he wouldn’t work and so I pushed on, entering the last 200 metres leading the race. We were swamped in the sprint for the line and I took 7th.

Whist reviewing my race data and filling in my race record I noted that I was pleased to have ridden to plan, achieving my goals and finishing on the same time as the winner. I was also reassured that all my power measures were down on what I’d been achieving during winter training, so once I get back into race mode I know I’ve still got lots more to give.

With my second race looming, I decided to approach this race differently, attacking from the peloton with 1 lap to go. With the cold weather present I got onto the rollers, warming-up to my usual procedure.

Once again, almost straight from the siren this time, we set off at a relatively high pace. A few riders decided to break from the peloton numerous times during the early stages of the race, but their attempts were not successful. The numerous attacks subtly increased the average speed of the race, and soon riders were beginning to drop from the peloton. I moved towards the centre of the peloton, to be able to respond to these attacks whilst still benefiting from the draft the riders in front were creating.

As the number of laps to go dwindled to single figures, the pace followed suit. Sticking to my race tactic, I attacked with 1 lap to go, breaking away with one other rider. We gained a few seconds on the peloton before a hairpin bend, from which I pulled off encouraging the rider behind to take a turn. He did not have the legs to pull through, and so I continued to stay on the front. Unfortunately the peloton caught us in what was left of the lap. I managed to sprint for the line, dropping the rider whom I had worked with in the break, and finished 6th. I was awarded £10 for my position 🙂

York Sports Day at the Races #2

My form for my second appearance at York Sports day at the Races had significantly deteriorated, due to a cold. Nevertheless, the experience gained from these first races are valuable to me and I decided to participate in the race. My race tactic for this race simply consisted of a sprint finish. I would pick out a rider who appeared to look strong, follow his wheel until the last 80/70m, and sprint past him using his slipstream. To no surprise, the race started at a high pace, and continued to go on at such a pace. Many riders began to drop from the peloton, and we soon began lapping those who weren’t able to stay.

I moved up towards the front of the peloton, to avoid being caught up in a crash, and to be able to respond to any attack. I positioned myself well, taking my turn on the front on the backwind stretch, and drafting riders on the side/headwind parts of the circuit. However, the cold soon began to take hold, and I began to struggle to stay with what was left of the peloton. In the final few laps, I dropped off the back of the leading group but continued to pursue them. In the end, I finished a few seconds after the leading group, despite having a cold. Hopefully my form would pick up before I my next race at Lichfield.

My form had improved since York Sports Day at the Races #2, and my cold had almost entirely gone. My race tactic for this race was to sprint for the line, as I was not able to achieve this in my previous race. Situated on the outskirts of Birmingham, I was hoping that the race would not be cancelled due to the heavy rain and wind present. Warming-up beside the home straight, I watched those who were on the track racing, deciding which line to take around which corner, and where to take my turn on the front.

Lining up at the finishing straight among 40 other riders, we set off at a reasonable pace, dropping those who weren’t able to stay with the peloton. The wind howled down on the circuit, and soon the peloton was breaking up. A leading group was created, consisting of 8-10 riders. Two riders in their second year of being a Category A then attempted to break from the leading group, and they were successful in their attempt. I responded by returning to the front of the leading group, driving and urging the group on to catch these two riders. Unfortunately, the two riders stayed away and so we were now competing for third place. Approaching the finish line on the final sprint, I began to sprint with those behind me. One rider just managed to pass me before the line, taking 3rd place.

Finishing in 4th place, I was satisfied with my performance in this race. I felt that I had positioned myself well throughout the race, and that I am improving consistently both physically and technically in road racing.